InsightaaS: In May, InsightaaS discussed the release of the original “Collaborative Economy Honeycomb.” The infographic, created by Jeremiah Owyang, the pioneering social media analyst who built a career at Forrester as a leading social media analyst and who is now the leading voice of the Collaborative Economy movement, provided a stunning one-image synopsis of where and how the collaborative economy is taking root. Over time, I would occasionally include the graphic in presentations. Usually, I’d observe that we think of music  – which was, at its apex, a $37 billion industry – as the setor that was most affected by cloud alternatives. I would then put up the Honeycomb, and note that two of the 12 segments included in the graphic (focused on substitutes like Uber for taxis and limousines, and Airbnb for hotels) are eating into industries that are $175 billion per year in the US alone, and that Uber’s June financing round, in which the company raised $1.2 billion, provided more cash than the IPOs for Cisco and Microsoft combined (if I were to redo the presentation tomorrow, I’d add that Uber’s valuation has doubled since June, to about $40 billion today). Each time I presented the Honeycomb, I would get the same reaction – people throughout the room would be scribbling the reference on their pads so that they could review Jeremiah’s work in more detail without being interrupted by my commentary!

Fast forward to today, and Owyang has released Version 2.0 of the Honeycomb. It is greatly expanded, with 12 major sectors (up from 6) and 30 subcategories (up from 14). And it reflects the organic growth of the collaborative economy in other ways: as Owyang says in his introductory remarks, “in the newer hex areas, they are often fewer logos as the market is young –in the more central hex areas, we had to remove logos due to excessive market crowding –a sign of market saturation in one area.”

As both the diagram and the economic activity around collaborative economy standouts like Uber and Airbnb illustrates, this is a fast-moving trend. Most of the logos aren’t familiar to the casual observer, but many are likely to be over time. And as an added bonus for those who click through to Owyang’s website (link at the bottom of the graphic), he has posted a spreadsheet containing details for more than 500 collaborative economy funding events! 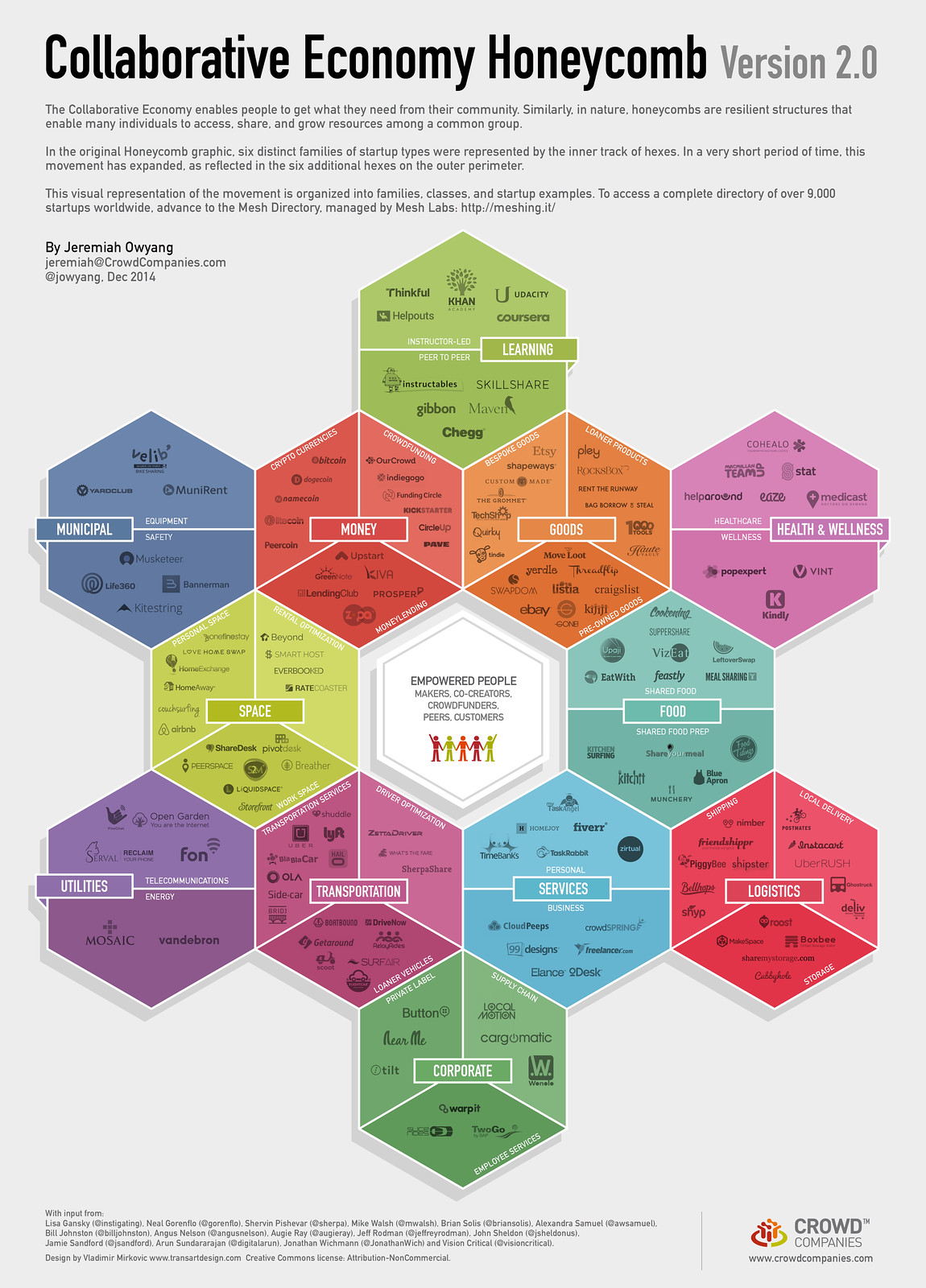 Read Jeremiah’s comments (worth a look) and access the link to the funding spreadsheet: Link